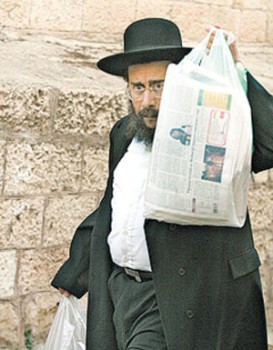 Avrohom Mondrowitz escaped to Israel and beat back extradition on charges of sodomizing boys. Mondrowitz was a frum radio personality who falsely claimed to have smichah and a doctorate in clinical psychology. Relying on frum referrals he “counseled” and sodomized many boys. Eventually he non-Jewish victims came forward but he escaped to Israel back in 2006 before his arrest warrant could be executed.

Because Israel won’t extradite him there is no way to bring him back to face criminal charges. But thanks to the New York State Child Victims Act, Chaim Zuckerman, another of his victims will get his day in court. The Ger yeshiva, Yeshiva & Mesivta Bais Yisroel, where Mondrowitz was used as a counselor is included in the lawsuit. They were directly responsible for enabling the abuse by Zuckerman, who chose to use his name for a report in the New York Jewish Week. The events leading up to the abuse was Zuckerman seeing Mondrowitz bent over a boy with both their pants down. Zuckerman reported this to the principal who it turns out is also an alleged abuser who fled to Israel. Rabbi Avrohom Leizerowitz, the principal chastised the boy and forced him to enter counseling with Mondrowitz who sodomized him. Eventually Zuckerman was kicked out this and other yeshivas run by Ger and ended up on the streets.

Some people worry about punishing schools with lawsuits for events in the past for which the current administration may bear no direct responsibility. I would argue that even so, it is a past debt owed. But in the case of Ger, protecting child molesters is part and parcel of their culture. Their designated member of Knesset in Israel, then Health Minister Yaakov Litzman, was deeply involved in fraudulent manipulation to obstruct the extradition of serial child molester Malka Leifer, and help to other sex offenders. So I have not an iota of sympathy for their whining about the costs. More importantly, the abuse traumatized Zuckerman, derailed his normal progress and no doubt still costs him in emotional burdens.

One other thing worth noting. Ohel Children’s home, which has been sued by another abuse survivor was making referrals to Avrohom Mondrowitz.