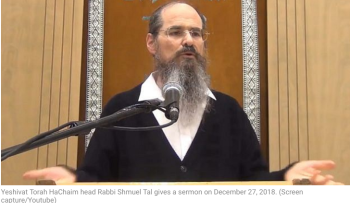 Rabbi Shmuel Tal had a scam. As head of Torat HaChaim yeshiva as well as several other religious institutions in the central Israeli town of Yad Binyamin he went around claiming ruach hakodesh (Divine or prophetic inspiration). Tal counseled a young married woman to get a divorce from her husband in order to marry him. Tal claimed he knew through ruach hakodesh that Yifat, his wife, would die shortly. He also claimed to know through ruach hakodesh that he was the reincarnation of King David and she was the reincarnation of Batsheba.

The woman got the divorce but the quite healthy wife didn’t die on the predicted date. Tal now tried to get his wife, Yifat, to agree to him taking this woman as a second wife but she refused this polygamous offer. So Tal ignored the woman.  END_OF_DOCUMENT_TOKEN_TO_BE_REPLACED