Izchak Kreshevsky, anti-internet kanoi who was arrested for soliciting sex for money from a 16 year girl, is no longer the scheduled speaker tonight in a satmar shul in a Monticello Satmar bungalow colony.

END_OF_DOCUMENT_TOKEN_TO_BE_REPLACED 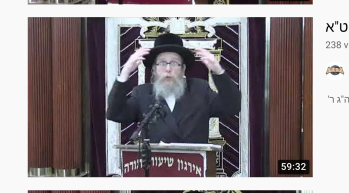 END_OF_DOCUMENT_TOKEN_TO_BE_REPLACED

Update 8/2/22- Krishevsky’s next court date is August 29th at 9 AM at the Monticello Village Justice Court.

According to the Ulster Sullivan Daily Voice, 62-year-old Rabbi Izchak Krishevsky
(יצחק אייזיק קרישבסקי) was arrested for propositioning a 16-year-old girl, offering her money for sex. This happened in Monticello at the edge of a baseball field of the local HS.

Krishevsky, a Brooklyn resident is a magid shiur ( talmud lecturer) and mashpia (personal spiritual advisor) in the chasidish world. He is scheduled to deliver a Three Weeks talk tonight (Sunday 7/17/22) in Monticello’s Beis HaMedrish Hagadol. I am wondering if he will be yanked out or they will ignore the arrest or claim he is a victim of a bilbul by an antisemitic shiksa and will launch a pidyon shvuyim campaign to cover his bail and legal expenses. (Update- a few hours after I posted they announced that the speaker, no longer named, will not be able to make it due to a “family emergency” and announced a replacement.)